Let’s Not Give Leaf Blowing a Bad Name

Mayor Dean Trantalis has proposed a controversial ban on leaf blowers, not because of the sound, which we all know can be intense, but rather because the trimmings get blown into the street and end up in storm drains and eventually into our waterways with the possibility of contributing in algae blooms The Mayor has expressed that his concern is not with noise pollution; it is with water pollution.

WHY WE DISAGREE ON LEAF BLOWER BANS 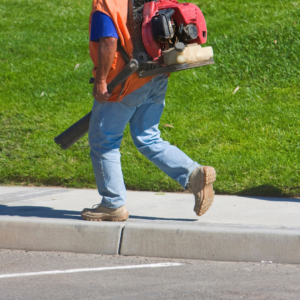 This approach has been employed locally in cities like Key Biscayne and the Town of Palm Beach, as well as on a broader level in Southern California. It was toyed within Coral Gables but tabled after homeowners and landscaping businesses came out in force against it.

As a business owner and leader in the commercial landscaping community, we felt this issue required further exploration and communication, so Kevin Hunt reached out to the Mayor and we have compiled this overview to keep you informed.

Our position on the issue is that this all-out ban would be an overreaction to two very distinct problems that would have a negative a deeply negative impact on our community.

Following is an explanation of these two issues and how we see this proposed ban as a shortcoming.

One of the secondary issues that give leaf blowing a bad name is noise pollution. No one can argue that the leaf blowers produce an awful noise, but there is a better solution than a ban to address this problem. Many municipalities, such as the Town of Palm Beach, have instituted ordinances that limit decibels produced by blowers.

There are less noisy leaf blowing equipment that can be used. The noise problem can be corrected by adopting a similar policy.

There is a real need to protect our clean water in South Florida. No one would likely argue that point. However, the water pollution problem is only marginally affected by the grass debris that makes it into the storm drains.

The bigger problem lies at that source with homeowners and their choices surrounding fertilizers.

Homeowners don’t abide by fertilizer blackouts or water restrictions. Most times, it’s not their fault. They simply just don’t know. To add to the problems, homeowners are equally guilty of blowing debris into storm drains with handheld blowers. It is likely that the overuse of fertilizers on residential properties creates the vast majority of the problem with algae blooms.  We feel that an education campaign would better serve our community to solve the problem in our waterways.

As we discuss the issues, consider these facts:

Nanak’s Landscaping maintenance and installation programs incorporate environmentally conscious best practices. It’s not just what our client’s want – it’s the right thing to do. We are a strong supporter of the City’s adoption of a blackout period for fertilizer. We also have stopped using higher nitrogen fertilizers as well as adopted the blackout period parameters at all properties throughout Dade, Broward and Palm Beach.

While it has good intentions, a leaf blower ban is simply is not going to solve the problem. Not only will it not succeed in solving the water and noise pollution issues, but it can also place an unneeded burden on the commercial real estate and landscaping industries.

Are you looking for a sustainably-minded landscape maintenance provider?  Contact us today.

Help us stay in touch by entering your email address below. [ctct form="3950"]

PEST ALERT: Why is that brown patch in my grass?

When your property needs to deliver more than curb appeal,
turn to Nanak’s – where we go beyond first impressions
to protect the well-being of your investment.